As the European Environment Agency (EEA) reports, the residential household sector is one of the largest users of energy in the EU, consuming roughly 30% of final energy consumption (excluding energy for transport). Nevertheless, Social housing represents 25 millions of dwellings and at least 50 million of inhabitants in Europe. Tenants (and landlords) in social housing at the moment receive mostly only historic data on their energy and water consumptions. This is very often in the form paper based (a bill) data which is sometimes unintelligible to the tenant and landlords and does little to actually inform them about the impact of their actions on the real savings which can be achieved. Information about water consumption is passing through the same situation as the described energy information.

In this abstract is presented the activities developed under the project ENERGYTIC, which is targeting to solve the above mentioned situation and provide the ICT means to allow final users how to optimize the energy consumptions in social housing. ENERGYTIC (www.energy-tic.eu) is founded by the European Commission through ICT PSP Work Program 2010.

Social housing incorporates the segment of the population having the lowest incomes in average, so this is the most challenging group of users which can be addressed by a project.

The target users need different information to be able to reduce energy and water consumptions:

As of today, many users cannot understand how they are charged and are not conscious of their way of using energy and water; bills incorporate too technical information and bar graphics showing total monthly consumption, either real consumption or estimate consumption. There is no way to compare user’s consumption under the same category of social housing use. There is no way today for users to understand the different alternatives they have to save energy and water at individual and collective usage. Finally there is no way to have a summary of links to websites where energy and water saving programs are proposed at regional and national levels and understandable for “common” users. All these items will be considered under the scope of the project thanks to the ICT tools to be deployed in the pilots.

EnergyTIC project put into place two pilots in two different countries, with different innovative ICT solutions, that will engage end-users with relevant information and messages to achieve the target savings in water and energy, at individual and neighborhood levels.

One of the two pilots will be located in Spain in Málaga, where 700 dwellings are involved in this pilot in order to demonstrate savings in energy and water thanks to the use of innovative ICT solutions in Social Housing.

EnergyTIC project include two types of group of users inside each pilot. First group of users is called the treatment group, i.e. those users who receive information through the ICT based solution. Second group is called the control group, i.e. those residents that do not receive the information through ICT based solution but receive only the supporting materials and general information about good practices on energy and water savings.

EnergyTIC project works are divided in work packages (WPs). One of those WPs in the project is named “WP3 Spanish cluster”. This WP3 is taking into account the Spanish pilot definition and implementation.

The objectives of WP3 are the following ones:

• Maintain the operation of systems and services throughout the pilot and set up and provide help services to pilot users.

• Design and verification of neighborhood ICT solutions adapted to the reality of social housing in Spain.

• Achieve the savings on water and energy (minimum 15% on energy) savings with a service easy to deploy and escalate in the market following the EnergyTIC project targets.

• Future rapidly deploy of service in the market.

The present abstract contains information about the following points:

3.1 DESCRIPTION OF SELECTED DWELLINGS IN THE SPANISH PILOT

Inside the Spanish pilot, EPSA (Empresa Pública de Suelo de Andalucía) is responsible of selecting the locations and users to be considered under de pilot.

A first neighborhood to be studied is the one called “Las Flores”. It is located in the northern city of Malaga, on the left bank of the river Gualdalmedina, with its boundaries formed as described below.

To the north, “Manuel Gorria” Avenue, South to “Albéniz” Street and its extension; separating the old neighborhood of “Cementerio de San Miguel” ; Old Cemetery, that has been transformed into an urban Park, the east, by the Industrial Complex “Centro-Olletas”; to the West, “San Juan Bosco” Street. 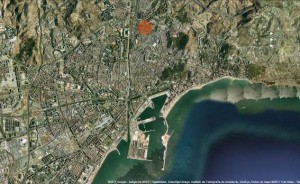 It lies on the side of a hill facing south, the topography of the changed slope gives way to a series of terraces on which they are based various housing groups, connected in general though pedestrian streets equipped with stairs and ramps.

The neighborhood “Las Flores”, consists of 1324 dwellings grouped in 44 blocks. “Las Flores” neighborhood is included since 2004 in a figure for the restoration of so-called “Integrated Neighborhood Restoration.” (“Rehabilitación Integral de Barriadas”). The district occupies an area of  50.800  m2 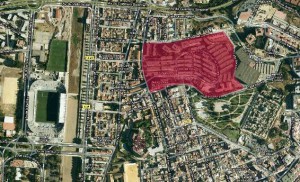 Houses to be included in the pilot need to have individual meters for energy and water.

In EnergyTIC consortium, Endesa is responsible for the electricity consumption data gathering and sending to CITIC for their treatment and dissemination.

Endesa is a leading Electricity Distribution Company in Spain and is deploying a smart metering system. This system will allow Endesa to gather electricity data with a high periodicity and accuracy. 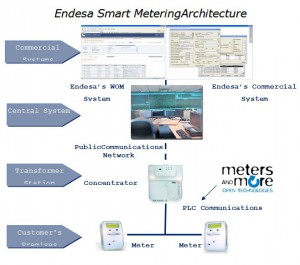 This solution is going to be used in the selected dwellings in the Spanish pilot.

The main characteristics of the smart meters are detailed in the following figure: 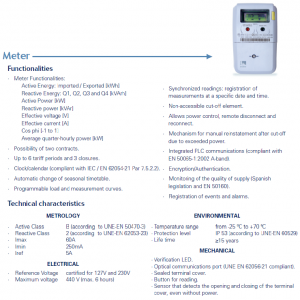 Communication between central system and meters is achieved through a communications concentrator. Concentrators communicate with meters using PLC (Power Line Carrier) technology, i.e. using the electricity distribution lines for signal transmission. Concentrators are installed in the transformer stations and each one communicates typically with 200 or 300 meters.

Central system communicates with concentrators using GPRS technology and public telecommunication networks. All transmissions include encryption and authentication for security and data protection. The protocol used in the system is Meters and More protocol, which is open and in process of standardization in Europe.

In EnergyTIC Spanish pilot, EMASA, is responsible for the water consumption data gathering and sending to CITIC for their treatment and dissemination.

EMASA smart meters used by this project are electronic meters from Contazara. Series CZ2000 and CZ3000. Really, CZ3000 is the only one to be used, because CZ2000 is an old model, in phase out status, and it is known none smart meter is installed in dwellings selected for pilot and, for that, EMASA will mount for testing the current version CZ3000.

Among the characteristics of these meters are noteworthy:

Among the data recorded and stored by these meters it can be listed the following ones:

With the management of these basic data for the meters, it is possible to characterize the water consumption by each customer and, therefore, is likely to provide information to each customer in this project: as an example of how to display these data to clients, it is presented below a graph of the prototype application done by EMASA.

For this project, EMASA will use the most advanced technology available for remote reading of meters:

In that CZ Wireless system three communications technologies are used and allow sending data stored in the meters to the central data of EMASA:

o       allows remote access on-line individually to any counter in the system to download data stored in it.

o       allows to program the massive discharge of the meter data so that in an unattended way, the data of all counters are stored in DD.BB. of EMASA.

The EMASA Central Server where is hosted all communications services plus storage of all counter data will be a HP Proliant DL380 G7   LFF. This server will reside physically in the Central Data Centre of EMASA and will become part of the cluster of servers of EMASA Information Systems and integrated into the established security policies of EMASA. This server will mount the Windows Server 2008 Operating System. The communications and control applications will be developed in the environment of Microsoft Visual Studio.

The D.D.B.B. where will reside all counter data will be implemented over SQL-Server 2008.

EMASA will use in this project the interface system developed to communicate RIAC with other systems of EMASA. This interface is a web service through which CITIC will manage to periodically ask the server of EMASA all meter data of the project having been received in the system since the last request made by CITIC.

The participation of CITIC is focused in the data treatment in order to deliver the information in a proper format through MHP DTT and the web.

The following picture shows the infrastructure overview of the pilot solution:

As we can see in the picture, the data treatment and server module has the following interfaces:

WINDINERTIA designs the district (block solutions) for the Spanish pilot.

The systems which can be considered for blocks and districts are the following ones:

First concrete proposals will be obtained through 2012, once the pre-audits (based in the information documented by EPSA) and complete energy audits are done.

The viability study of the proposals made by WINDINERTIA is been carried out by DETEA.

The first analysis is based on the buildings proposed by EPSA in “Las Flores “neighborhood to study the technical feasibility of installing cogeneration and photovoltaic equipment. Cooling and heating systems will not be studied since with the incomes of the tenants does not allow installing a cooling or heating service.

To carry out a cogeneration installation, it´s necessary a building having an area where it can be installed the cogeneration equipment and the storage heater. In addition it has to be taken into account the following points:

Around 60.000€ is the cost estimated to adequate and fit out the building for the cogeneration equipment. This investment had to be recovered with the following sales:

Concerning the Photovoltaic (PV) power systems, some considerations had to be taken before doing an installation:

Photovoltaic investment has to be calculated based in three points:

This abstract has been written at the month 9 of the project execution. The project total duration is 36 months. During these first nine months of the project, it has been started the works related with:

The ICT system deployed in the Spanish cluster is unique in Europe. It is an early and advanced system to help in the achievement of the close future challenges to be accomplished by EU nations with the participation of final users. Challenges are the following ones:

Introduction of electrical cars will make even more necessary to achieve energy savings and demand curve flattened before 2020. Otherwise supply and demand will not reach a balance with all the associated risks.